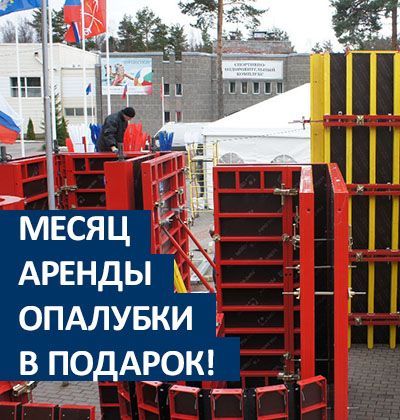 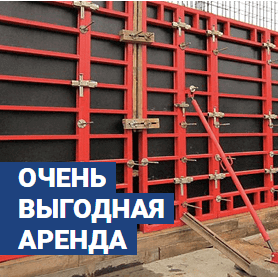 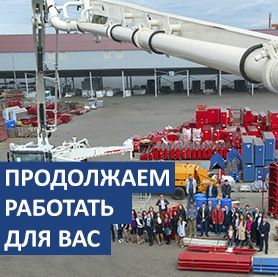 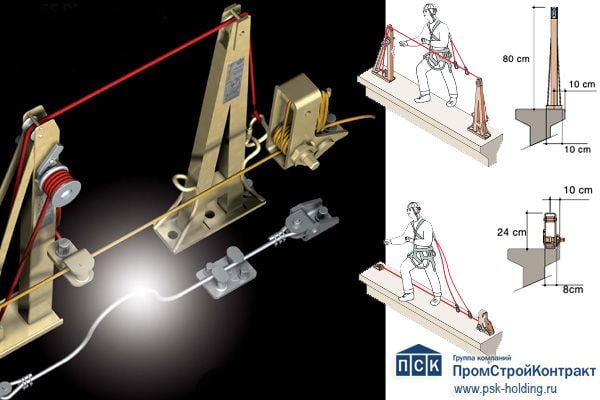 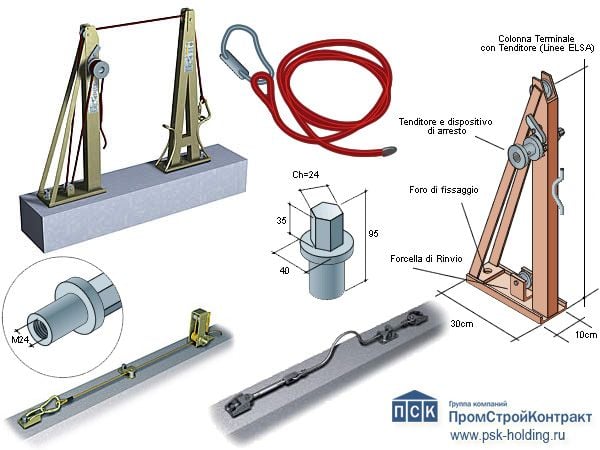 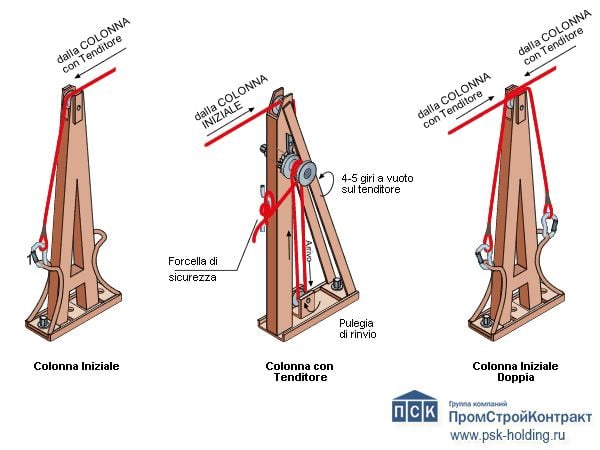 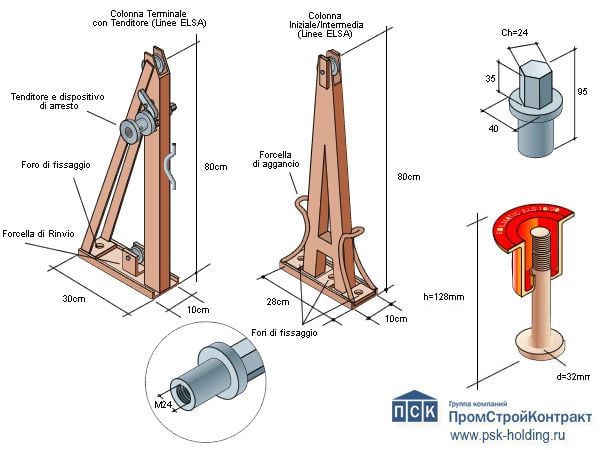 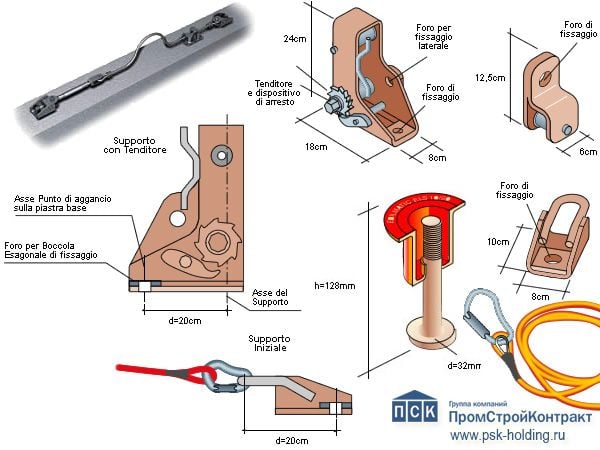 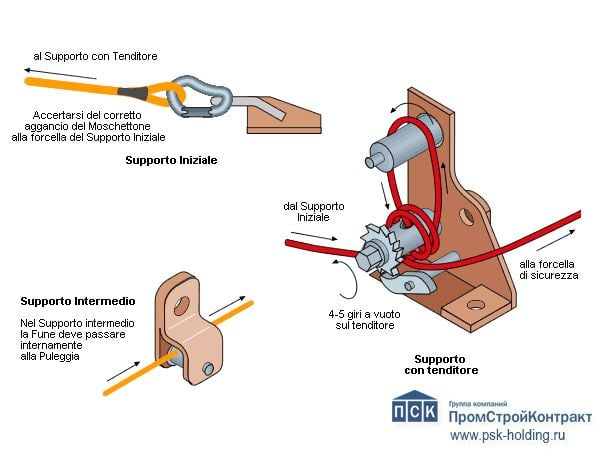 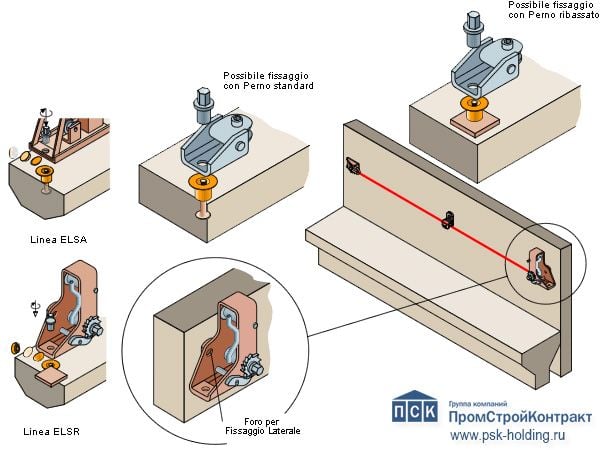 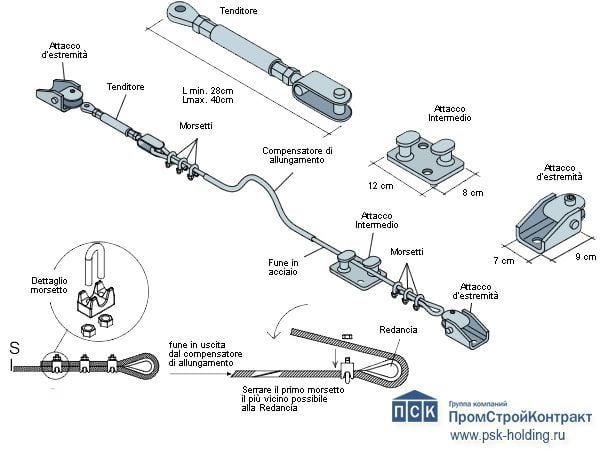 Edilmatic's safety devices are proposed for creating horizontal anchor lines to be utilized while installing and maintaining buildings. Such temporary portable devices are subject to EC-marking, as provided for by 89/106/EEC Directive. They are classified as third-class PPE (Class C) according to UNI EN 795 as well as planned and produced as provided for by such Standard and by UNI EN 363/93, especially in terms of ergonomics, comfort and effectiveness of the components.

ELSA lines are the standard version of Edilmatic's PPE (which can already be found in the market) being proposed in a new version having lightened Columns to be utilized for developing horizontal lines users at any height can fasten on, to work under safety conditions.

The components to be put at the ends of ELSR lines consist of Steel Supports having extremely reduced weight and overall dimensions, which can be used to create horizontal lines in structures showing a small useful space; such components can also be positioned on the lateral walls of the structures.

Both the Columns (ELSA lines) and the Supports (ELSR lines) have small dimensions, therefore, they can be arranged on the lateral edges of the structures (min 12 cms); in this way, the most of the surface of the structure can freely be utilized by the user (user's freedom of movement).

All components Edilmatic's Systems consist of are designed in such a way that it is not possible to cause any inherent risk factor. harmless materials, high mechanical performance (even in case of low temperature), dimensional stability are the main characteristics our components are featured by.

Innovative strong subject of Edilmatic safety lines: instead of traditional steel ropes, synthetic fibre ropes are used to develop horizontal lines. Such ropes have very good mechanical characteristics (high UTS and reduced elongation), a very small weight (50gr/mt), they are remarkably soft and flexible and allow the users to simplify and quicken the line preparation operations, in order to make the management of the components less "heavy" in terms of efforts and practicalness.

A fibre rope d=8mm in Red colour is utilized for ELSA PPE. The End Column has a built-in rope tightening device, which can also be operated by using commercially available spanners.
Anyway, we suggest to use a dynamometric spanner: in this case, the minimum tightening torque to be applied id equal to 5kgm.
The instructions for a proper tightening of the rope are described in the "USE & MAINTENANCE HANDBOOK" being supplied with each package (Figure 2).

Edilmatic's PPE range also includes Permanent Safety Lines, called ELSP Lines. They are fixed devices to be arranged on coverings and/or walls of finished buildings (both industrial and civil buildings) to develop horizontal safety lines, and allow users to fasten, in order they to carry out maintenance operations of the structures. Unlike standard ELSA and Depressed ELSR Lines, the horizontal line being in permanent lines consists of a stainless steel (AISI 316) rope, which is also suitable for arrangements outside the structures.

Initial and End Connection: end components of the stainless steel system (AISI 316 stainless steel) being equipped with articulated end connections to fix both the rope and the tensioner as well as with rear hole for a fixing of the structure.

In-Between Connection: it is utilized as intermediate line path divider (to be positioned every 15mtrs of line) and has a special shape allowing the user's slinging spring hooks to pass through and it is also equipped with 2 holes to be fixed to the structure.

Tensioner: device to tighten the rope, equipped with end connections being calibrated to be fixed to the supports (at one side) and to the rope.

Rope Extension Compensator: this is a special component supplied with the lines, it acts as energy absorber. It consists of a pipe made of special steel, which is properly calibrated and shaped in such a way that in case the user falls, its horizontal position is reset and an extension of the rope occurs; in this way, it can absorb a big amount of the force applied. A compensator strain causes an extension of the rope length and a lower transmission of the force to the end supports.

Rope with clamps and thimble: with this component, it is possible to develop the horizontal stainless steel (AISI 316) line. It is equipped with clamps and steel thimbles to be assembled for developing the eyelet anchoring bases, which allow a fixing to the tensioner and the Initial and/or End support to occur.
Before assembling make sure the bearing structure is suitable for the concerned force applying to the supports, in case of fall. The maximum strength transmitted by the Line is equal to 1800kgs.
Only skilled personnel may carry out the assembling operations.
All components ELSP Lines consist of are dimensioned and tested as provided for by UNI EN 795. To properly utilize the devices and carry out the assembling of the components, the instructions reported in the “Use & Maintenance Handbook”  supplied with each Line package shall strictly be followed.